About Naidu & Naidu » Meet The Team 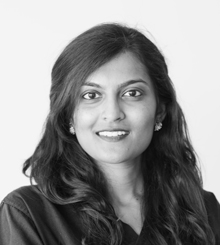 Sheetal was brought up in the coastal city of Mombasa, Kenya & moved to the UK in 2000 to gain her Bachelor in Dental Surgery (BDS) at the University of Manchester. She then ventured down south to Maidstone, Kent and continued to hone her skills during her vocational training year. This was followed by several years in a busy general practice in Harlow, Essex and during this time she completed her examinations and portfolio to gain Membership of the Joint Dental Faculties (MJDF).

She then joined Naidu & Naidu in 2010 and, through personal research and training through the Faculty of General Dental Practice (FGDP), found that her interest lay in the field of Endodontics (Root Canal Treatment). This branch of dentistry is involved in the management of infections & trauma to the nerve and blood supply of our teeth.

Sheetal has completed a 4-year postgraduate specialist training programme at Guys, Kings & St. Thomas' Hospital, London (GKT) and has been awarded the Masters in Clinical Dentistry (MClin Dent) in Endodontics and has been accepted for Membership in Endodontics (MEndo) by the Royal College of Surgeons of Edinburgh. As a result of these achievements, Sheetal has been recognised as a Specialist in Endodontics by the General Dental Council. Currently, her training allows her to see a variety of complex cases (including dental trauma) spread across two busy hospitals in London. She also spends a couple of days at Naidu & Naidu, where her practice focuses purely on Root Canal Therapy with a strong emphasis on evidence-based dentistry and the use of advanced microscopes and imaging techniques.

« Back to Meet the Team
Patient Reviews